Roots of the State 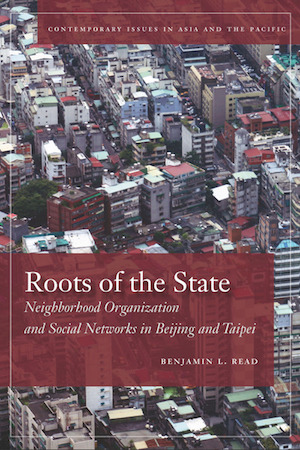 The state-sponsored neighborhood organizations found in the cities of China, Taiwan and elsewhere in East and Southeast Asia seem, at first glance, like anachronistic and bureaucratic curiosities. Descending in part from dynastic and colonial mechanisms of cooptation and control, they perform administrative duties that facilitate a wide range of government programs, including welfare, public health, policing, and (in authoritarian cases) political surveillance. Based primarily on participant observation, surveys, and interviews in Beijing and Taipei, this book shows that these statist structures remain salient and deeply rooted in certain parts of urban society, even as other constituents ignore or reject them.

China’s ruling Communist Party has redoubled its commitment to the longstanding Residents’ Committees, now widely integrated into Communities, primarily as a means of keeping tabs on the country’s rapidly changing urban neighborhoods and bolstering its organizational presence there. In Taiwan, the Neighborhood Wardens have historically formed elements of the Kuomintang’s mobilization apparatus but became politically plural as the ROC democratized starting in the 1980s. The wardens are voted into their positions through competitive elections and have considerable latitude for leadership and representation, while China’s RCs remain under the tight control of the CCP. Although they differ significantly in their political roles and also vary in many details, from the perspective of residents these institutions present broad similarities as all-purpose focal points of local authority, providers of services, organizers of neighborhood events and activities, and liaisons to city government.

A close look at these organizations provides insight into the micro-level fabric of state-society ties, and shows how such relationships vary from person to person and neighborhood to neighborhood. While these structures form an important part of the underpinning of repressive regimes like that of China, in other settings they show that institutions once created to control societies can evolve in ways that empower them.