My research centers on local and grassroots politics in East Asia, mainly China and Taiwan. The process of trying to learn about these things has also stimulated me to write about field research methods. Below is an overview of my work, organized by topic. My full CV is here.

In Taiwan, as elsewhere, studies of democracy focus most on the national level. Here, I examine democratic practices and processes at the local level, particularly cities. The campaigns and activities of city councilors and neighborhood leaders provide a window on the workings of Taiwan’s political system in ways that connect with ordinary people’s lives. I’m still in the early stages of this project, actively conducting fieldwork and building on my earlier work on grassroots politics.

Articles, book chapters, and more from this project:

Early in my studies I became fascinated by ultra-local organizations that incorporate popular participation yet are fostered by governments and drawn upon for administrative purposes. They are unfamiliar in Western settings, but Japan, South Korea, Indonesia and other East and Southeast Asian countries feature tens of thousands of these structures, which operate at the neighborhood or village level and facilitate social welfare, public health, policing and other state functions.

The first such institution that I have studied is China’s system of urban Residents’ Committees (jumin weiyuanhui). My doctoral dissertation was based on fourteen months of fieldwork in Beijing and other cities, which included repeated visits to a set of ten RCs, along with interviews and a survey of 1,124 Beijing residents. I later conducted several rounds of follow-up research. Meanwhile, from 2003 on, I have also studied Taiwan’s neighborhood administrative system, which constitutes a second example of such an institution. Urban neighborhoods (li) in Taiwan are headed by elected leaders (lizhang) who work with city government liaisons (liganshi) and choose a set of block captains (linzhang) to help them. Extensive interviews in Taipei and Chiayi, as well as a telephone survey of 1,140 Taipei residents, have helped me to understand this system.

I analyze and explain how ordinary citizens look upon and interact with these extensions of the state. I argue that the ways in which such organizations selectively draw upon and cultivate community networks highlight the efficacy of social capital, a concept theorized by scholars like James Coleman, Robert Putnam and Peter Evans — but also show its ability to further state projects, not just societal purposes. While China’s authorities hold the RCs on a tight leash, Taiwan’s lizhang system illustrates that institutions like these can evolve from authoritarian origins into highly democratic practices.

This book lays out the Chinese and Taiwanese cases in full detail and compares them to one another, also placing them in the context of other East and Southeast Asian cases: 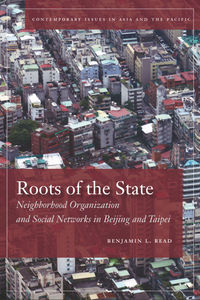 I’ve also co-edited a book in which contributors compare varieties of such state-linked organizations in countries throughout the region, including Japan, Indonesia, Thailand, Vietnam, and Singapore: 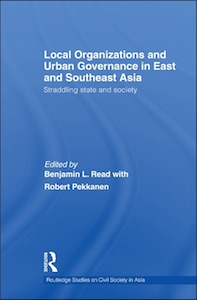 In other work, I’ve examined groups that are largely autonomous from state funding or control, in other words, civil society organizations. Prominent theories posit that such groups have a number of salutary, pro-democratic effects, such as inculcating habits of political participation in individuals and demanding accountability from governments. My work has focused on the nascent homeowner movement in China and its organizations (yezhu weiyuanhui). This research has aimed, among other things, to clarify the conditions under which civil society groups actually manifest positive effects in observable ways.

I use a range of different methods in my research, qualitative and quantitative. I don’t aspire to be a methodologist per se. But over the years I’ve been inspired to write several papers and to coauthor a book about methods. The inspiration for all of it stems from experiences and questions I’ve encountered in my own work. 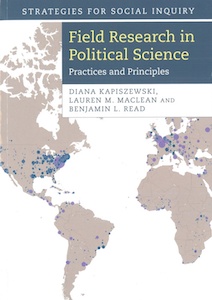