Local Organizations and Urban Governance in East and Southeast Asia 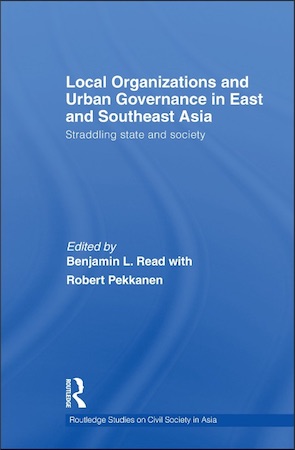 Citizen associations that maintain close links with governments are usually lumped into a single conceptual category, that of Leninist or fascist “mass organizations,” crude tools of manipulation and political control. Meanwhile, civil society organizations, seen as wholly independent from the state, are often taken as the sole appropriate model for today’s world. Yet close inspection of empirical cases from East and Southeast Asia shows a diversity of ways in which states interact with grassroots-level associations. In some cases, such as China, these institutions unquestionably help regimes monitor the population and thus maintain political dominance. Yet even there, and also in democratic settings, government-sponsored organizations typically cultivate close ties with certain types of constituents and enjoy considerable support. Their role in governance and in representation must be understood, together with the problems they pose. This essay surveys theoretical approaches to these issues and puts forward a way of conceptualizing “straddler” groups.

Japan’s neighborhood associations (referred to as jichikai and chounaikai, among other terms) offer a particularly intriguing case of a “straddler” organization. These groups number around 300,000 in total, encompassing nearly all Japanese in voluntary membership. Their complex history involves origins in community initiatives, subsumation by the state during the period of militarist expansion, abolition under the post-WWII occupation, and then a comeback. While generally working hand-in-hand with local governments and thus promoting important collective goods, these groups remain self-organizing and embody substantial quantities of social capital.

Swaying Between State and Community: The Role and Function of RT/RW in Post-Suharto Indonesia

Neighborhood associations in Indonesia, known as RT/RW (pronounced “air-tay, air-way”), had important functions under the authoritarian Suharto regime (1966-1998), which put great emphasis on political stability. This grass-roots institution was imposed from above by the state to give a democratic flavor to the regime. It controlled people by keeping them under close supervision by the RT head, while also mobilizing them for political and ideological purposes, especially at the time of national elections. Messages from the government were transmitted in regular meetings, containing all sorts of indoctrination as well as other information. Still, through such processes as electing leaders by themselves, organizing meetings of all members and making many decisions concerning community life, or sometimes even submitting proposals and requests to higher levels, the RT/RW served to give people a pseudo-democratic sense that they were participating in bottom-up decision-making. This helped to defuse opposition to the government.

In spite of what had been its state-controlled character, the RT/RW survived the 1998 collapse of the Suharto regime. At least in my research site, there has not been much outward change in its function and the form of its activities. This continuity may be because the RT/RW in fact had more functions and meanings than were originally intended by the government. Close observation reveals that the residents make positive uses of it for such things as improving their daily lives, providing social security and a safety net, and protecting them from outside forces. It offers a mechanism for rapid economic and social development and at the same time serves as a shock absorber for change caused by this development. I examine how the RT/RW system functioned as a means of control and mobilization under the authoritarian regime, but how it simultaneously worked as a community organization in a real sense, based on my observation and surveys in a suburban area of Jakarta between 1996 and 2008.

The Mutual Colonization of State and Civil Society Organizations in Vietnam

Scholars of Asia and other non-Western areas are increasingly dissatisfied with classical civil society theory. Empirical research in such places suggests that the criterion of autonomy, central to classical civil society theory, may not be as important as is theorized in Western settings. Groups with strong connections to the state may also take on civil society roles nonetheless. This paper profiles three such organizations, most extensively the Ho Chi Minh City Children and Youth Services (CYS), a self-described “quasi-non-government organization,” to explore its implications for civil society theory. Since CYS is closely tied to the city-level governing elite through its officers, its inclusion as part of civil society must be justified more on the organization’s larger social functions than on its formal structure. Including an organization such as CYS, therefore, opens up possibilities for more comprehensive civil society research, particularly in an environment such as Vietnam where few organizations can exist without some type of government tie.

Municipal Governments and the Role of Cooperative Community Groups in Thailand

As a result of the central government’s decentralization policies, rapidly implemented since 1998, Cooperative Community Groups (CCGs) have become increasingly crucial for Thai municipal governments facing new and unfamiliar responsibilities. The groups are intended to strengthen communities and encourage them to depend on themselves in solving community problems. City governments have employed CCGs for both administrative and political support. Consequently, the governments can better address their new responsibilities and respond to local needs. They support CCGs through several means, such as encouraging local volunteer groups, providing basic training sessions, and organizing local activities and forms of services. State support of group activity may be especially important in a context such as Thailand where associational life in traditional rural areas was not strong. Furthermore, the closer interaction with city governments creates important changes within local communities themselves. They become more familiar with political dynamics and participatory democracy.

The Multiple Uses of Local Networks: State Cultivation of Neighborhood Social Capital in China and Taiwan

Studies of social capital — defined here as networks of interpersonal relationships — have sometimes focused narrowly on the bonds inherent in non-state voluntary organizations. As scholars have grappled with the multifarious forms of social capital and the diverse purposes for which it can be employed, they have been reminded that civil society is only one among many locuses of potent interpersonal ties. Indeed, social capital is integral to the functioning of state-fostered institutions, found in many parts of the world but especially in Asia, that facilitate policing and governance by immersing themselves in community networks at the ultra-local level. This paper presents quantitative and qualitative evidence from two cases of such institutions, one in democratic Taiwan (where neighborhood leaders are elected) and one in authoritarian China (where, by most criteria, they are not). This electoral connection creates substantially more accountability to constituents in the former case. Even so, there are strong parallels between the two cases in terms of local leaders’ activities, their administrative roles, and the nature of their links to communities. Contrary to civil society-based accounts, state authority does not always vitiate such interpersonal bonds; nor do such connections tend to take the form of patronage ties described by theories of clientelism. The paper explains the mechanisms through which states harness the power of such networks, as well as implications for policy.

The Sign of the Cross: Vertical and Horizontal Tensions in Vietnamese Church-State Relations

Apart from its demonstrated ability to withstand foreign political and military intervention, the Vietnamese Communist Party (VCP) has managed to regulate most societal organizations tightly. Yet the Vietnamese Catholic Church has often demonstrated its ability to resist the vertically structured, assimilating pressures of the Party-state, and to spread horizontally through society, creating a space for social and political freedom. This chapter examines the Church’s ability to maneuver within the constricting political framework of communism since the unification of Vietnam in 1975. It reveals how the Church, commonly viewed as a hierarchically rigid organization, is instead more flexible than one would expect, especially when it is challenged by the authority of the state. While relations with the government can at times be contentious, they remain remarkably peaceable in Vietnam because of the Church’s ability straddle the political divide.

Ever since it became an independent city-state in 1965, efforts at community development have been largely state-driven in Singapore, in contrast to many Western practices. In this polity, where decision-making has been highly centralized, grassroots organizations have been considered an approach to the decentralization of governance. These groups were created by the state to provide feedback to the government regarding people’s needs as well as actively socializing citizens into national programs like public housing. The search for political legitimacy by what Manuel Castells considers the archetypal model of the developmental state led to the construction of this communications system between the state and grassroots. Despite state oversight, organizations like the Residents Committees are composed of local leaders. In straddling the roles of state and civic sectors, the question is whether such collective movements preclude the search for alternatives, as some argue, or if they represent a grassroots approach to decentralization, as political scientists and sociologists in Singapore have countered.